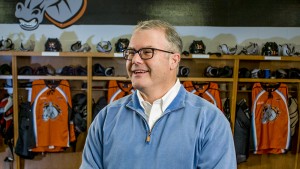 Lamar Hunt Jr. grew up around sports. As the son of Lamar Hunt, famed sports promoter and founder of the Kansas City Chiefs, Lamar Hunt Jr. has always been driven to build great things upon the foundation of success that his family laid out for him. One of his mottos in life is, “To whom much is given, much is expected,” and he founded Loretto Sports Ventures and the other Loretto Companies as a way to use what he had been given to give back to the community.

With such a pedigree, it’s easy to say that sports are in Lamar Hunt Jr.’s blood, and certainly his family surroundings gave him a natural start in the business of successfully owning and managing sports teams and related assets. When he was in school, Lamar Hunt Jr. participated in tennis, basketball, track, and football, and he even entertained ambitions of becoming a professional tennis player as a young man. As he grew older, he found that his love of sports was better served by continuing his family’s legacy of sports promotion and branching out on his own with Loretto Sports Ventures and his ownership of the Kansas City Mavericks ice hockey team.

Lamar Hunt Jr. turned his family’s history in the world of sports to his advantage by creating Loretto Sports Ventures. As part of his family of Loretto Companies, all of which are dedicated to the idea of improving the community, Loretto Sports Ventures draws on Lamar Hunt Jr.’s experience in the sports world to provide resources that help the sports industry to grow and expand in Kansas City and beyond while also giving local young people the opportunity to experience the joy of sports.

In January of 2015, Lamar Hunt Jr. purchased the Kansas City Mavericks ice hockey team, then known as the Kansas City Mavericks. Since then, Loretto Sports Ventures has focused heavily on growing the game of ice hockey in Kansas City. In the 2015-2016 season, the Mavericks celebrated 52 regular season wins and took home the Brabham Cup. Beyond promoting the team, however, Lamar Hunt Jr. uses Loretto Sports Ventures to help give back to the community by helping to make Kansas City a premier hub for ice hockey in the region by adding more rinks and other venues to the area and giving local kids an opportunity to take up the sport.

Lamar Hunt Jr. believes that his convictions and his dedication to helping those less fortunate should shine through in every aspect of his business and life, which is why, along with other employees of the Mavericks, he helped to craft a team mission statement that focuses on “Professional Hockey with a Family-First Attitude!“